I’ve never believed in protest marches. Too often, a march seems only a physical manifestation of an idea of which we are already aware. More often than participants want to admit, it’s simply a ragtag group of fringe activists shouting at the moon, holding up traffic, or occupying street corners that would be better used for public conveyance. The marches themselves seem disorganized, rambling, and end with rhetoric that does nothing but allow participants to vent built-up frustrations and schedule another protest. They are great for getting mom, uncle Bob, and your freaky aunt Matilda out of the house so we can catch up on some “honey-do list” projects. That they return home refreshed with a lot of positive energy is a bonus, I suppose, but I have seen little more beneficial effect than that.

Not that I am against marches or protests. Believe me, I like a good walk, when I can. Nice fresh air, good friends, and the occasion to look at scenery you just whiz past every day in your car. Unfortunately, until the docs and I resolve my physical issues, a forty-yard mosey to pet the neighbor’s dog is all I can muster in the way of a march for now.

Still, marches in protest seem useless and often counter-productive. The protestors are often labeled as freaks, activists and malcontents. The message is often lost in the visuals of the march itself as television stations focus on the video and individuals post constant selfies of themselves and their friends on social media, forgetting to mention the substance of the event. As for the objects of their discontent – usually an individual, frequently a politician – they are unmoved by these actions. Typically, more than 50 years of protest marches on one issue or another has hardened and polished their responses. Even local and state law enforcement agencies have procedure manuals on how to handle protests and protestors, from permitted to unpermitted. Basically, it’s all been done before.

Protest marches are particularly ineffective against politicians. Computer-generated gerrymandering has made all but a few congressional, state, and county seats immune to change, whether of party or politician. So, ensconced in their safe seats, politicians are free to stick to ideological instead of pragmatic positions. Plus, any politician worth his or her salt has already had more protest marches dropped at his doorstep, for and against an issue, often the same issue, than they care to track. They have developed a patter so innocuous and generic for these events, they can 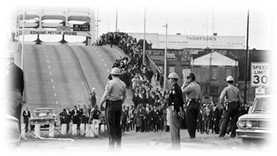 inject them into whatever is being protested at the moment without offending any protestor or issue.

But there is something familiar with the recent protest marches, something remembered, something good. On a black-and-white television set many moons ago, I watched as black men and women marched and spoke and resisted their treatment by our country. Citizens they were, but apart, second-class. I again watched closely as young men and women, white, black and all other skin tones, protested in the streets against a war that killed 50,000 of their friends, brothers and sisters. Being part of the “silent majority” at the time, my family firmly attached to conservative values, I abhorred these malcontents who refused to live by our rules. Our guys won the elections. We were right; they were wrong. Why didn’t they understand? Why didn’t they accept what was? They weren’t going to change anything. They were just dirty, filthy hippies, communists, long-hairs that should be run out of the country. Send them back to the continent whence they came! Does any of this rhetoric sound familiar? 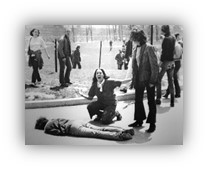 In spite of our opposition, these groups continued to protest. Against overwhelming odds, against injury and even death they protested. I saw the news reports of Dr. Martin Luther King Jr.’s death, not on YouTube, but in real time. Then I saw the actual news videos of the protest at Kent State. I saw our own National Guard kill my fellow citizens. And then, I saw what could never happen, happen. The Civil Rights Act and Voting Rights Act were passed by a solidly entrenched and ideologically divided Congress. I saw and lived through a President cancelling the military draft and ending a disastrous and questionable foreign war. I saw him do it against the wishes of those entrenched industries and wealthy businessmen and women who were profiting greatly from its continuation.

I watched this all play out on that little black-and-white TV screen, through Look magazine, and the local evening newspaper. I watched as each group marched and protested, first by themselves, then gradually with others, until it seemed the whole country was marching. They never backed down. Some gave their lives to the cause. Their principles and ideas were that important to them. They protested and marched against what many believed were the wishes of the majority. But they protested and marched so much their voices were eventually heard, above all the opposition, against all the entrenched powers. Politics as usual stopped until their issues were addressed, and addressed with the significance of law.

What I learned and finally saw was that protests work. Protest marches do work. But for that to happen, those who march and protest must have the determination and belief for the long haul, the long run. You have to be willing to sacrifice and bring others to your calling. This cannot be a whim or a fad. The powers that be, your fellow citizens, and above all your politicians, need to know that this, this right now, is important. This we need to fix. You need to march the march of the resistance!

So, for those of you out there walking and protesting, good for you. This is where it begins. Now I have to go find that doc’s phone number. Maybe I can get in 45 yards today! Just need to find the right sign to hoist.

Dr. Douglas Courtney has been writing professionally for over 15 years and for recreation for over 50 years. He has published four books, many of which are on sale at Barnes's and Nobles website and Amazon.com. Dr. Courtney is the author of the short stories listed in this site as well as the two novels. His writings are fictional and non-fictional and he posts regularly on events of the day.

A way station for the thoughts and online stories of Dr. Douglas Courtney. Browse his commentary on current, and not so current, social and political events. Read some of his short stories, or buy his latest books. In any event, come look around and enjoy!